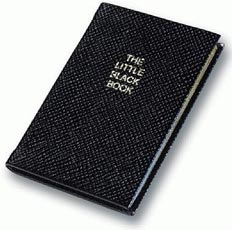 Imagine the picture – a gang of dozens of people breaks into a casino, opens a treasury, takes almost all the money, kills many guards and then just leaves. Nobody can define their personalities. The casino owner is struck by heart attack. End of the story. The times of such casino event are over. And only movies are still shot, like Ocean's Eleven.

Nowadays the gangs do not need weapon of considerable dimensions and physical strength. They need only inventive brain and tiny devices for robbing the house. Now they enter the front door, not the back one, as it was in the faraway past. As in the story with the gangsters, the modern “brilliant minds' make up new ways of getting into the heart of the casino. If they do it successfully, they get rid of punishment. If they don't, they inscribe their names in the Black Book of Casino Players.

The Black Book was created in 1960. Also it is called the List of Excluded Persons. The gambling business in Nevada suffered from the organized crime for many years. Different mafias were raging in Nevada and it seemed that nobody could stop them. The gambling business owners were afraid that it could be a reason for the Congress to gradually destroy their business by huge taxes.

The new law, defending the rights of the casinos, allowed taking any person's documents and different equipment for examination. Marshall Caifano, whose name was later written to the Book, filed a charge against the state and gaming board that they violated his rights. That was very brave of him but his claim was denied.

What Is the Point?

The Black Book is not only a list of so called “persona non grate” in the casinos but also a warning for the casinos. If a person, whose name is inscribed in it, steps into a casino, he will be charged of crime. At the same time if the casino does not inform about such act or allows that person to stay, it will be fined or can even lose a license.

The first person was written in the Book in 1960. Some members were excluded; some were just nominated but never entered the list due to many reasons.

The only woman in the Black Book is Sandra Kay Vaccaro. She helped her husband John Vaccaro, who was involved in one of the biggest slot cheating rings. They stole millions of dollars from Nevada state.

Today Nevada Gaming Commission and State Gaming Control Board are in charge of the list maintaining, including and excluding the people.