Everyone everywhere and always wants to win a piece of jackpot. Some people do it legally, some don’t. Why? Because you do not need that much knowledge or fortune to cheat. The core component is skills. Cheating in casinos has different shapes, looks, variants and names.

So, what is casino cheating?

It is acting against the rules of the house.

Everything starts with the easiest ways, among which is pickpocketing. The casinos are always crowded and you would not notice that you lost a couple of chips somehow. And it doesn’t matter if you play the slot machine or roulette but not internet roulette of course :). There’s always someone, who wants your piece of steak. By the way, if you want a piece - find yourself a nice poker tutorial right here.

Also in casinos the experienced players take advantage of the freshmen – if a player is not careful, the other one can easily see his cards. It is sometimes easy to cheat in the card games. The players can simply bend a card but it is necessary that the “eye in the sky” would not see that. Such players are called paper gamblers.

Cards mucking demands much talent but it is very easy to notice those, who use this cheating method. In a very propitious moment the player simply substitutes the card he received with the one he’s got in his pocket or sleeve. These people are calledhand scoffers. Pretty similar scheme is used in the roulette top hatting. 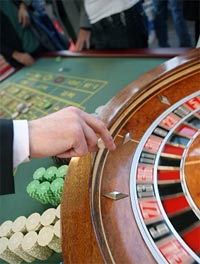 It happens that the player is “assisted” from outside. The “helpers” can be other players at the table who exchange the signals during the game and let each other know what cards they have; the staff, who deals the cards in an “appropriate” way, so that one of the players would receive a good hand.

One of the most famous teams in gambling is Richard Marcus’ team, which“has stolen” hundreds of thousands of dollars from the casinos. Their strong point was pastposting and Savannah move methods. The father of the modern pastposting is Mumbles, who introduced new approach to the casino cheating.

It seems that it is impossible to cheat in the roulette, as you cannot influence a ball, a wheel and its speed. But everything that was ever made by a human has some defects, which can be used for someone’s profit. For example, a biased wheel, a method that was used many times for cheating. The most famous “user” of the method was Joseph Jagger, who won $325,000 in 1873. Today this sum looks quite impressive, but in 19th century it was just unbelievable.

The casinos do their best to fight cheating. Cameras everywhere, guards watch each and everybody. Each house tries to convince the people that they have all the territory covered with the cameras, so less brave cheats would step away.