Jagger is famous for his brilliant biased wheel attack. He is also confusingly called “the man who broke the bank at Monte Carlo,” while it was Charles Wells, about whom Fred Gilbert wrote the same-name song. His name is often written as Jaggers. 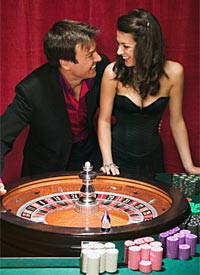 Jagger worked for a cotton factory. His major was engineering, which he decided to apply not only to the cotton industry. He knew that everything that was ever made to the people had flaws. So, it was possible to find some in the roulette wheels, as they couldn’t be perfectly balanced. That is why he went to check that out to Monaco.

1973. Having arrived to Monte Carlo, which was always known as the best gambling center in Europe, he chose Beaux-Arts Casino to play. Nobody knows for certain, why the target was that very casino but the dice was thrown.

Jagger hired six clerks, who worked for the house, to watch the wheels and to write down the results of each spin. Then he analyzed the results and found out that all the wheels but one showed the predicted random winning numbers. It appeared that the numbers 7, 8, 9, 17, 18, 19, 22, 28 and 29 came up more frequently than the others.

But the casino was not going to lose more money and they decided to replace the tables. The next day Jagger came and started losing. He had no idea what was happening until he noticed that the scratch on the “fortune” wheel was missing.

He nearly lost all the gaining just for only one day. But gradually he found that very table and played back. This time he won $450,000.

The house kept “putting” money into the Jagger’s pocket. That fact inspired them for another table changing. This time it was more original and complicated. Each night after closing the staff replaced the frets around the wheel.

Probably, Jagger did not suspect that they were that smart, and continued playing. He started losing again. A run of bad luck lasted for two days and he decided to step back.